The folksonomy juggernaut is rolling towards museums, as an intriguing article in this month’s D-Lib Magazine (“Social Terminology Enhancement through Vernacular Engagement”) makes clear.

As anyone who has tried tagging images with metadata knows, it’s tricky business; opening up the effort to a collective, in its instictive wisdom, seems a path to the social engagement that has lit up del.cio.us and Flickr – and may, incidentally, improve discovery.

The D-Lib article, however, raises many more questions than answers. How to confine the ‘regular folk’ taggers to using directed, compact terms, rather than spill out wordy reactions to art, or – worse yet – offer personal information for follow-up appraisals? When and how to apply categorization of terms? Which artwork should be available for tagging: one already sought out (“Help others find this work”) or a series randomly served up (“Help us tag our inventory”)?

These and many other questions haunt the prototype tool The Art Museum Community Cataloging Project – quixotically nicknamed “Steve”. I played around a little with this tool today, but wasn’t able to find much with it; it seems barely developed. Few terms garner a hit: one of them, “woman”, retrieves a video installation at the Guggenheim by Pipilotti Rist. But “video” does not retrieve the same piece; instead, it calls up two pictures of a Nam June Paik installation – pictures in which it is really difficult to pick out what’s going on.

The insufficiency of “woman” or “video” to really describe a piece of art goes to the heart of what’s unsatisfying about social tagging of art, at least as exemplified at this early stage. The illustrations accompanying the D-Lib piece show prototypical tagging on the most childish level, the lowest common denominator. What is a piece about? Look at the descriptors in this prototypical markup: 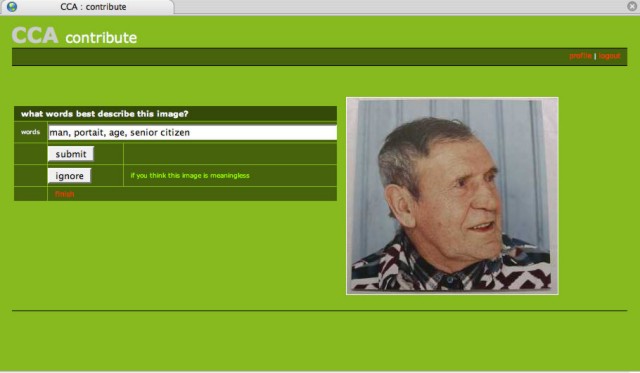 If that were the typical range of a ‘folk’ pool, who would want to fish in it? Is it too much to say that such tagging strips away the identity of not only this particular man, but this particular piece of art? What I’m suggesting is that such elemental descriptors, widely applied, won’t be of much use – even for someone trolling around for generic images of “senior citizen” – unless they are integrated into more controlled cataloguing (actual title, creator, material, dates, genre, some kind of categorization).

In that way, folksonomy could help my hunt for, say, that video piece by Rist in 1998 that featured a woman, or a chair, or whatever. Maybe it’s inevitable that the only way to overcome subjectivity, idiosyncrasy, and ignorance is to force ‘folks’ into the most basic description of the most basic elements of a piece of art. But that’s a dumbing down – a flattening of response – that may not be worth whatever gains in search functionality it promises.

Clayfox wayback
It’s gotta be around here somewhere
Under the hood
This blog is protected by dr Dave\'s Spam Karma 2: 285394 Spams eaten and counting...